For some time, I have felt an urge to experience ritualistic performance. My intuition was that this kind of performance would deepen my sense of the origins of theatre and of our need to create visible forms through the body, set elements, costumes or whatever the devices may be, to describe the world within us.

As I stipulated in my original application, my hope was to spend time with cultures and theatre companies around the world where theatre has an active, radical role in social healing and expression. I was seeking out experiences, at once personal, intellectual and professional that would broaden my understand of the potential of theatre today, and concrete clues as to how I might bring this to bear on my work. I will describe the two major trips that I undertook.

My first experience, following the advice of my mentor Peter Brook, was to seek out the Theater of War, an organization run by Bryan Doerries.

Theatre of War is now the public artist in resident for New York City. Bryan made his name creating performances of Greek Tragedies followed by in depth community discussions for US soldiers around the world. To do this, he convinced the top US generals that theatre would have a therapeutic benefit, and they funded this program to the tune of several million dollars. He has a unique way of giving voice to audiences, he says “the audience is the teacher” and “the real theatre happens after the reading, in the audience”. He has now created performances for doctors, patients, addicts, victims of domestic violence, and most recently an incredible Antigone in Ferguson, Missouri, which was created with a gospel choir made up police officers, students and teachers at Michael Brown’s school.

The second part of my year was spent developing a film of my play LOVE, which has recently aired on the BBC, as well as, more pertinently, getting to work on my new play, FAITH, HOPE AND CHARITY. In this research, I have time and time come back to this ambition I have to create a theatre form that is not just “relevant” to an audience but rather exorcises the very fiber of their experience of being alive today in a social, political and intimate sense. For this, I have been very much inspired by Bryan’s work and indeed the blossoming friendship between us has given me encouragement in this direction. It is the spirit of what I experienced in Missouri and in New York that will stay with me, the feeling of breaking into an audience and allowing the audience to be the performer. Even if I don’t end up making such an explicit shift in form, my sense of what theatre is has developed.

My trip also took in the St Gabriel day celebrations in Addis Ababa, and an expedition to the hermit-built, rock-hewn churches of Tigray, high up in the mountains. My hopes going there were to be in the midst of a living religious tradition and celebration and to get a feeling for a true ritual that is part of the fabric of everyday life and belief.

My experience in Ethiopia is too vast (and to an extent too recent, I only returned 10 days ago) to describe within the confines of these few lines, so I will instead simply share some key impressions.

In Addis, St Gabriel’s day, I move among thousands of white clad silent pilgrims in the midsts of the vast parkland around  the main cathedral. The church of St Gabriel is impossible to penetrate, of course, crowds swelling by its tiny entrance. But around it, intermittently, pilgrims all break into a chant together, led by an invisible “leader” somewhere down further in the woods who booms out words through an amplifier. I am struck by the way the space is spread out, how no-one is rushing to be close to the music. Instead, they are connected to the people closer to it by a common intention, and the pilgrims further up in the woodland sing with those lower down, connected by a musical chain, that stretches a kilometer or more. They are singing songs of praise and thanks. I think about how the theatre here has no stage, has no performer, or if there is a “ principle performer” he or she is simply there to mediate, to lead the others in a song and in an action, but at every point everyone is connected.

Later on in my trip, I travel to the mountains of Tigray. Where, on visiting another church, Maryam Korkor, at the top of a mountain that is only possible to reach after a two hour hike, I meet the resident monk and his sister, a nun who has lived her whole life in hermitage on the top of this mountain, living in a cave with little shelter from the elements. Nowadays, she is in her eighties and her weather-beaten face looks up at me from her stooped crawl of a posture. I ask them what difficulties they have had to overcome, and they both, in their answers, speak of the need to suffer, to sacrifice. For them, the hundred or more days of fasting a year are a physical reminder that we must pay, we must feel suffering in order to get closer to Christ. The body, put in this circumstance of need, is better able to sense its relation to God. Being alone and high up in the mountains allows prayer to be more direct. This reminds me of a long conversation I had with a Dominican priest and Scholar in Strasbourg in late 2017, who described Fra Angelico’s painting “the Mockery of Christ” to me in answer to my question about the origins of we might call “acting” in the religious tradition. In this painting, the nun and the priest are both doing “ meditations on the life of Christ”, after the foundational Dominican text written by Lorezo di Caulibus, where they are both imagining (in the case of the monk) and physically experiencing the suffering that Christ went through, in the case of the nun, whose hand is brought to her cheek where she has felt the slap on her own skin as Christ did on his.  What interested me in both these cases is not so much the doctrinal, historical intricacies or quirks of these practices but rather the way they give us a clue to the origins of mimesis, the act of putting oneself in another skin. For me this feels like going back to the mystical origins of theatrical expression in a very concrete way. 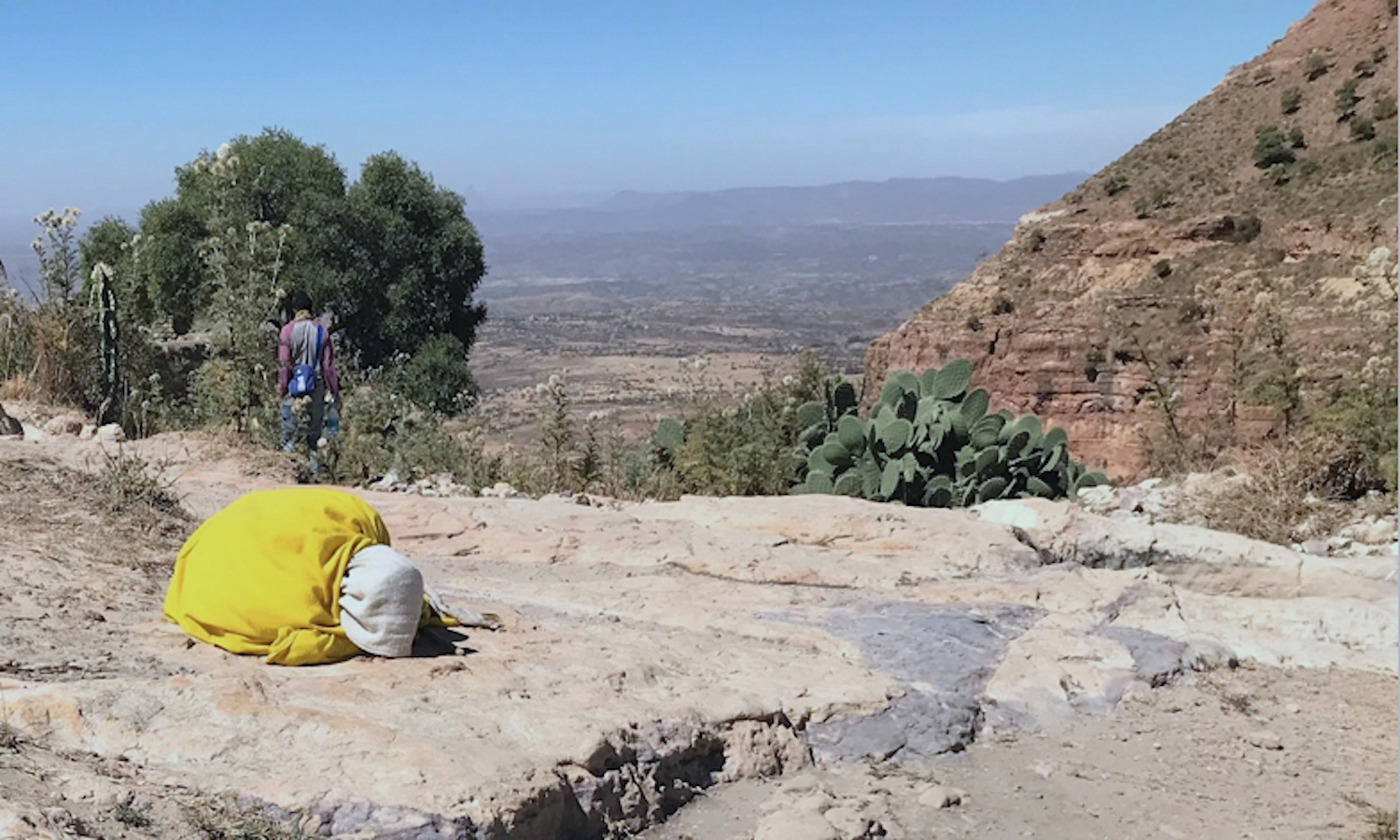 Finally my trip brings me to Lalibela, night to day of the 6 and 7th of January 2019. A visit to the ancient town of Lalibela, with its 12 churches carved into ground is, for the pilgrims, a form of immersive experience that leads them to test and deepen their faith. Although accounts differ, it is probable that these incredible churches were to be visited in a certain order. Today, there is a passage way from the “tomb of Adam” through a dark tight underground tunnel to a church which is meant to feel like heaven, a kind of practice for what is to come in the after life. Packed full of Pilgrims it takes an hour to get through a space that would take three minutes alone. Indeed, when I visited there were 40 000 people there, as opposed to a resident population of 3000 or so, many of whom had travelled for months by foot, and will take a quicker route back only to return again soon after. 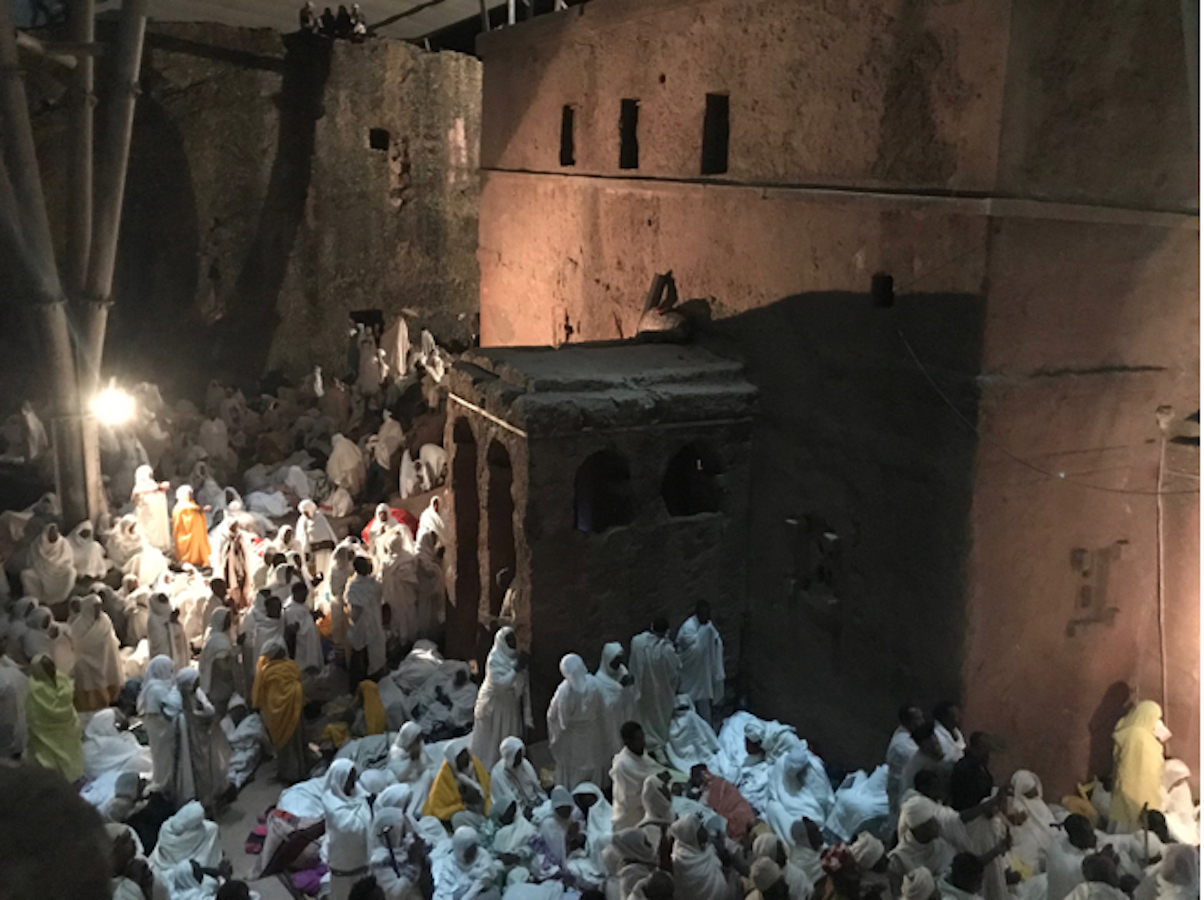 On Christmas Eve in the midst of dense crowds, my guide got me a spot overlooking the church of Raphael, built into the ground, thirty meters below us, where the priests were to begin a 14 hour uninterrupted chant in the area around the church, including a midnight mass and a candle ceremony. We returned at 5 the next morning to witness the culmination of this durational performance where the pilgrims descended into the square below and looked up above to see 200 or so priests chanting and swaying in a coordinated motion. Below near the entrance to the church, another group of singers entered the crowd. My guide explained to me that the priests above the square, looking down, were representing the angels, and the moving procession of singers below, the Shepards, on the morning of Christ’s birth. A two-hour repetitive chant ensued celebrating the birth of Christ, which brought an end to the ceremony.

For some time, I have felt an urge to experience ritualistic performance. My intuition was that this kind of performance would deepen my sense of the origins of theatre and of our need to create visible forms through the body, set elements, costumes or whatever the devices may be, to describe the world within us. For me theatre remains a way of trying to get to the core of life, to go behind the mirror, not simply to reflect life in a superficial way as it is understood in common speech and thought.

I feel immensely grateful that the Arts Foundation was able to support me in this journey. Without this award, I would not have been able to take the time to really follow this intuition through. Of course, now I must continue this process of exploration and discovery and to deepen the question: why theatre?